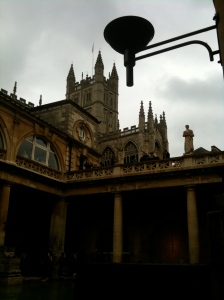 I had written a lengthy blog yesterday, full of musings about Bath. I lost my network connection however, and lost the post. So today’s is an improvised version, written on the bus from Oxford to London. Yes, the bus. They have wifi, how advanced of them! Australian buses have just discovered air conditioning.

Tuesday the 1st of June took us to Bristol, with a detour to Bath. Bath is an interesting city, mostly Georgian elegance but with The Roman Bath House and a medieval Abbey that is built almost on top of the Roman temple & bath house. The Roman bath house is an amazing place, the best example of Roman bathing houses anywhere. I can’t be certain, but I thought that aspects of the exhibit of artifacts from in & around the bath house have changed since I last saw it, and I liked the new display.

The floors are worn & uneven and there are some remarkable pieces of carved stone that are simply amazing. A medusa head, the long flowing locks have snakes twinning through them, but the beard and the moustache deign the head as male. Strange, but perhaps an amalgamation of the celtic gods of the area and the Roman, after all, the Roman’s dedicated the bath house and the hot spring that bubbles up to fill the bath to Minerva, adding the Sulis as that seems to be the goddess the people who lived here worshipped. Notice that the ‘angels’ are standing on globes, suggesting that the Roman’s saw the world as round. 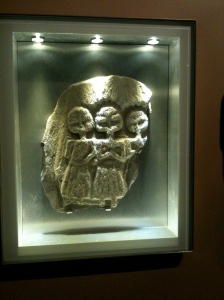 As the Bath House was a spiritual place, as well as a place of community & cleansing, there are some interesting things that have been found in the river and excavation of the site. Combs, jewellery, spindles, and of course, the amusing curses, written on little bits of lead and folded up, to be cast into the sacred spring. Asking the goddess to curse the person who stole my cloak etc. These things were cast into the sacred spring, designated by the Romans. Bathing took place in the larger bath and the different rooms of the bath house, which included a frigidarium and a semi circular healing pool.

All things must pass, and the roof of the Roman bath house fell in and the temple was either destroyed by the Christians or just fell into disrepair. Built nearby the Roman remains is a huge Abbey, first built there in the 700’s. The building that is there now is more modern, a French gothic building, towering over the baths. It was built on part of the temple complex, perhaps to claim the spiritual feelings of the place for the Christian God. But it is a very worthy effort to glorify God. Beautiful stained glass windows, amazing carving all over the roof and in the vaults, evidence of Christian worship through the ages.

Christian life in Bath continued, though it wasn’t until Georgian times that Bath became a bustling centre that it had once been. Grand Georgian houses lined the streets, and people went to the Pump room and the Assembly rooms to socialise, drink the water (tastes a little metallic and is a bit cloudy) and critique the latest fashions. Jane Austin spent some of her life here, hating every minute of it by all accounts. She didn’t write anything while in Bath, though she did set some of her novels there. My favourite Austen is Persuasion, and the heroine Anne Eliot expresses her distaste of Bath and the fashionable, shallow people that inhabit it. But I cannot find the same distaste, to me Bath is fascinating with its Roman ruins, Georgian sandstone buildings and the Abbey, lending a interesting twist to the history of the area.

I live in the world, and intend to explore it.
View all posts by KTunravels →
This entry was posted in England, History, Travel and tagged Abbeys, Bath, Roman. Bookmark the permalink.

2 Responses to Bathing Not Permitted Anymore