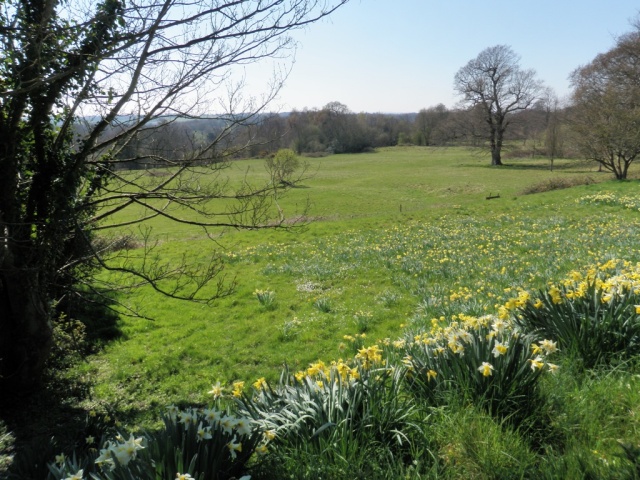 In Flanders, poppies grow every year over the fields where so many died almost a hundred years ago. In Battle, daffodils & jonquils cover the hillside where, almost thousand years ago, many lost their lives. A sombre thought really, for such a tranquil scene, but somehow the massive loss of life that comes with war & battles fades as time goes by and the participants are forgotten & faded historical figures.

Battle is a little town in the county of Kent. It’s about 1 & 1/2 hours on the train from London and well worth the trip if you’re interested in English history. Because this is The Date. 1066. The Battle of Hastings. A kingdom won & lost in a day and a way of life gone for the English people. It was also the last time England was conquered by a foreign ruler, which is an impressive feat, considering the massive power & land struggles of Europe in the Middle Ages. 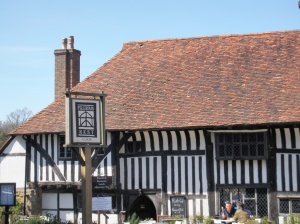 A & I set off for Battle on Good Friday, a beautiful sunny day, just right for walking & exploring. After a short walk up from Battle railway station, we found the Abbey, an imposing gate towering over the town square where Good Friday fun was going on – in the form of marbles and people dressed up as weird things (like alcohol bottles!) We decided to do Elevensies after the Abbey & battlefield, keeping in mind the Pilgrim’s Rest pub that advertised ‘elevensies’ & other type things.

You go into the historic battlefield via a Gatehouse, where they also have a small museum & the obligatory gift shop. we picked up the audiotour and set off down the path to history… except for the brief stop in the interactive museum that gave a brief run down of the events leading up to the battle. This included some remnants of songs from the time period and a 5 minute film narrated by David Starky, in his best ‘posh English professor-presenter’ voice – ‘It was the yearh ten sixty six and the English King Harold is about to be challenged for his kingdom twice in one day, leading to his body viciously hacked to pieces’ sort of thing. A & I have had lots of fun imitating him! 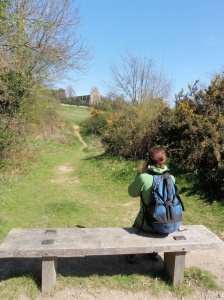 Once you out into the open air, the audio guide starts to get serious. You walk around, listening to sound effects of battle, of Norman knights & clinking armour. It’s quite effective, but you do get the weird feeling that you’re engrossed in a one-sided phone conversation. Of course, the landscape has changed a bit in 1000 years, but glimpses of the hillside where most of the battle was pitched and the ruins of the Abbey give a pretty good atmosphere and grace. You walk in a big circle around the field and the audio guide informs you of the events in a fairly chronological order. He also seemed to get outraged at certain actions of Duke William of Normandy (hereafter William the Conqueror), like the part when the Norman soldiers pretended to run away, but my favourite bit was the random quip “And someone had killed his horse”. Hilarious. And it happened twice “Someone has killed his horse again”. Zombie horses for the invading Norman army? 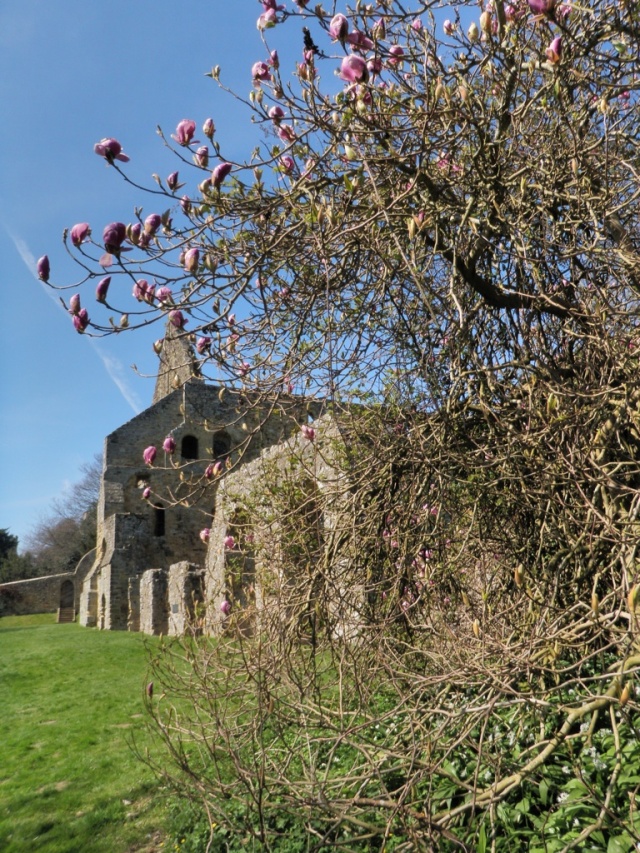 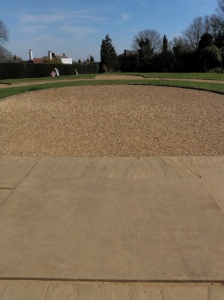 The battle fought & eventually won by the Normans, you wander up to the ruins of the Abbey, built on command of the Pope. It seems that many people were horrified at the bloodshed of this battle, and the Pope ordered William I to build an abbey on the site. And, for the sceptical, the monks insisted that it be built in this spot, instead of a few miles away in a more agreeable location. The place is marked where Harold Godwinson supposedly died, although according to that tapestry, he could have died two ways… But his body was viciously hacked to pieces after his death, this fact we were repeatedly told – as I said, the audio guide dude got a bit stroppy at those Normans. 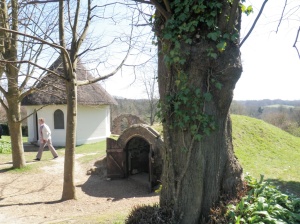 Very little remains of the actual abbey, it suffered from Henry the VIII’s dissolution of the monastries and was pulled down to make room for a country house for one of his courtiers, who is buried in the nearby church. Walking around here, I kept wondering at the wealth of stuff hidden under the green grass & pretty flowering trees. 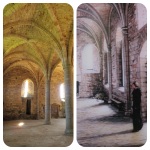 The small round building was small chapel and the hobbit hole a medieval refrigerator. In the ruins of the Abbey, the latrines and the monks living  quarters remain. A lovely vaulted room was the novice hall, but the artist impression didn’t really give much of an indication that the space would have looked very different from what you see today, although a visit from a certain character from a movie tickled my fancy… see if you can guess who!

After a delicious lunch outside in the sunshine at the Pilgrim’s Rest, we decided to do a walk of the Great Wood, a route I found on my iphone. It wasn’t the prettiest or most inspiring walk, lots of dead wood & brush and some parts of the trail were hard to walk on due to the fact that it was a horse trail too and it had been wet recently – lots of mud. We did see a wreath hanging in a tree, which was pretty cool. No idea what it was for, but it was a reminder of how old the area is in terms of human settlement. After trailing around the Great Wood for a few kms, we met up with the 1066 walk, which starts down on the coast at Hastings and follows the path Duke William & his army took as they marauded through southern England to meet Harold. Then it was back to the station, where we both collapsed on an uncomfortable metal bench to wait for the next train back to London. 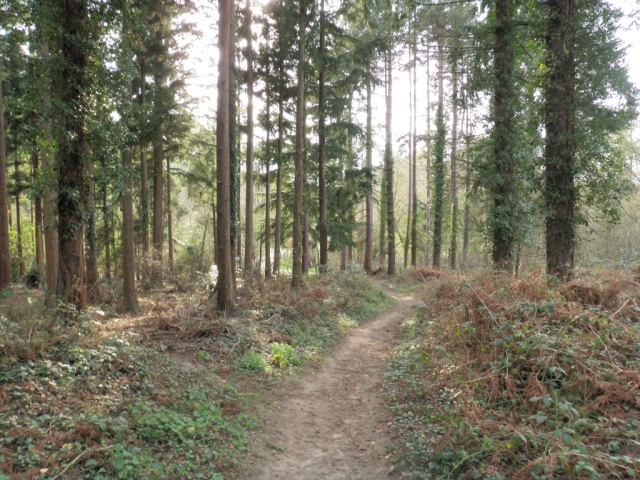 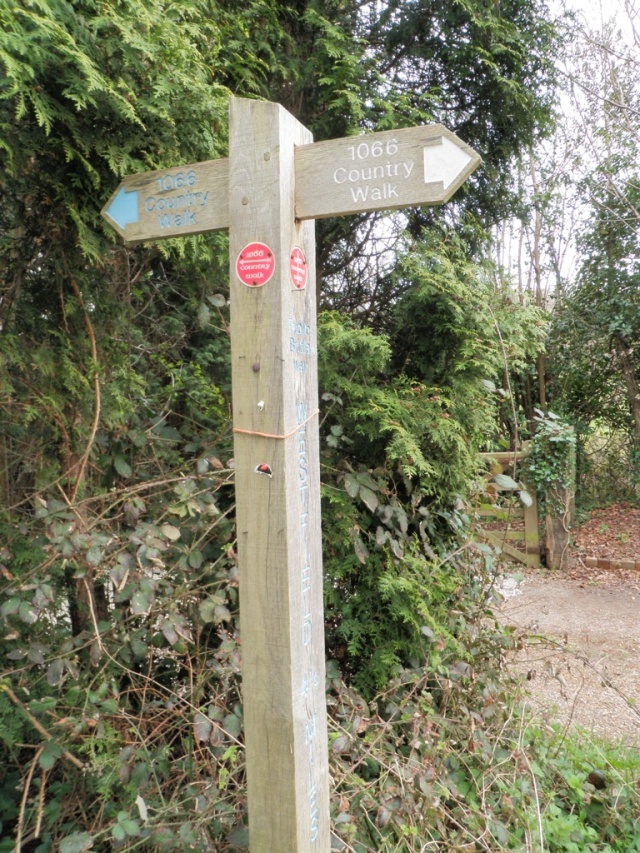 If you want a cohesive, thought out version of the events of the Battle of Hastings, 1066, visit Battle & get the audio tour. If you can’t, I recommend looking up the book ‘1066 And All That’ and reading that version. Much more enjoyable. After all, it’s what YOU remember that’s important to you, right?

I live in the world, and intend to explore it.
View all posts by KTunravels →
This entry was posted in England, History, Travel, Walking and tagged 1066, Battle, Battle Abbey, Battle of Hastings, ruins. Bookmark the permalink.