The Moon is Bright

Due to an unforeseen and unfortunate circumstance, I’m travelling alone this Easter. My vivacious housemate had a bad reaction to some medication and had to pull out, so here I am, alone in a edgy, noisy & interesting suburb of Athens.

It took me ages to find the hotel, I gave up trying to use a map and used my precious Internet data to try and figure out where I was. I had been walking in entirely the wrong direction, so I’m glad I did it.

And when I checked in and opened the curtains in my room, I was almost squealing – up on the hill is what looks to be ancient ruins… I thought it was the Acropolis for a few minutes until I actually located it on map.

It’s Lycabetus Hill, where the Lycabetus Theatre was. You can go to the top and have magnificent views of Athens and the most famous hill of all, the Acropolis. The hotel has a roof top terrace, very well set out for sipping wine or coffee and looking at the hill.

After a bit of rest & contemplation, I went out for dinner. Tis is something that feels like a big deal – I’m not used to dining on my own. A cup of coffee here and there in a cafe, sure, but not a whole meal. Nothing to be scared of though, except I forgot a book or anything to occupy myself and the taverna was a bit empty so even people watching wasn’t that much fun.

I had roast lamb with fried potatoes (which looked just like fries) and a bottle of Mythos, the Hellenic beer I’d seen advertised at the airport. It was not bad lager, but tomorrow I’m trying ouzo! 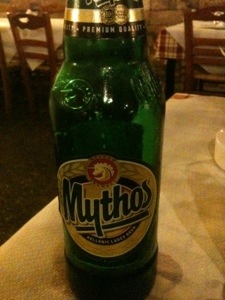 When I asked for the bill, I was also given a dessert, on the house, although I have no idea what it was. It was sliced with cinnamon & was sweetened with honey withs slightly grainy texture. And it all cost less than €12. I did leave a tip though.

So tomorrow it’s the Acropolis and maybe the National Archaeology Museum and more food. Will settle down now, and the legs are achy and the head is tired.

I live in the world, and intend to explore it.
View all posts by KTunravels →
This entry was posted in Free Stuff, Greece, Travel and tagged Athens, Easter, lone-travelling, lycabetous Hill. Bookmark the permalink.