Two museums, lots of walking, a ride in a funicular – today was great! But I may have damaged my feet a bit more than I’d like…

Starting off early again, I hit up the National Archaeology Museum, only a few blocks from my hotel in Excharia Square. With an impressive facade, it holds some treasures that take their place as some important steps in human development & culture. There are Neolithic artefacts, hundreds of pottery pieces from the Cyclades, a room full of the treasures of the Mycenaens, archaic, classical & Roman sculptures and bronzes and some beautiful stuff from Thera, a town like Pompeii (only the residents knew the signs and left before the disaster!)

I really loved the archaic Athena, her body curving under the dress, so beautifully carved by the sculptor. The artistic advance is something that I’m not really knowledgable enough to talk about, except that is is truly beautiful and when you eventually come to the Classical rooms, you can see how they worked & improved on an artistic style to make the beautiful sculptures of the Classical age.

And here’s Zeus, or Poseidon. I think the jury is out forever on who it actually is, he could be wielding a lightning bolt or a trident, but look at the bronze! Poised, the muscles gliding under the skin, a feel of energy & movement. This is what made this period classic and copied, sculptures like this. The Romans copied this style, as did the Renaissance 2 centuries later. But so saying that, the modern art of Henry Moore and others takes quite a bit from Cycladic styles, the elongated bodies and large block heads.

After several repeat visits to certain areas, I left the museum and went on into the city, catching the metro to Syntagma. I finally found the Benaki museum and decided on a lunch break, to rest my sore feet. The Benaki museum is a collection of artefacts from early prehistoric Greece to modern day war of Independence Greece. It’s a wonderful collection, vases enough to satisfy, Byzantine paintings of the Christian faith (makes an interesting and not all that strange leap from pagan imagery to Christian) and rooms full of textiles and costumes. I really liked the rooms that were of 18th century mansions, with the dark wooden interiors richly decorated and ornate. I didn’t make it to the top floor, where later history was covered, it was getting close to three and I ran out of gusto.

I sat in Kolonaki Square in the shade for a while and decided to go up Lycabettus Hill. Except instead of the smart, foot saving option, I climbed up instead. But it was so worth the pain, the view is just incredible. Once you are high enough, you can see the Aegean Sea in the distance (it is true – Athens is quite foggy) and then the buildings of the Acropolis and thousands of white buildings for many miles around. 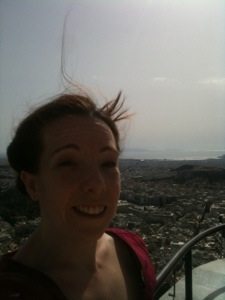 Breezy too, right at the summit! There’s a little chapel on the very top, the Chapel of St George. It was interesting and a little bit strange inside, and I kept thinking that that very place probably once had worship to Athena, not Christ and St George. We are human and that’s what we do, if a place has a special ‘feeling’ we like to put some thing there to conserve the feeling. Like a temple or a church. Or a weirdly phallic building which has no religious significance whatsoever but I’m sure it has some kind or meaning… 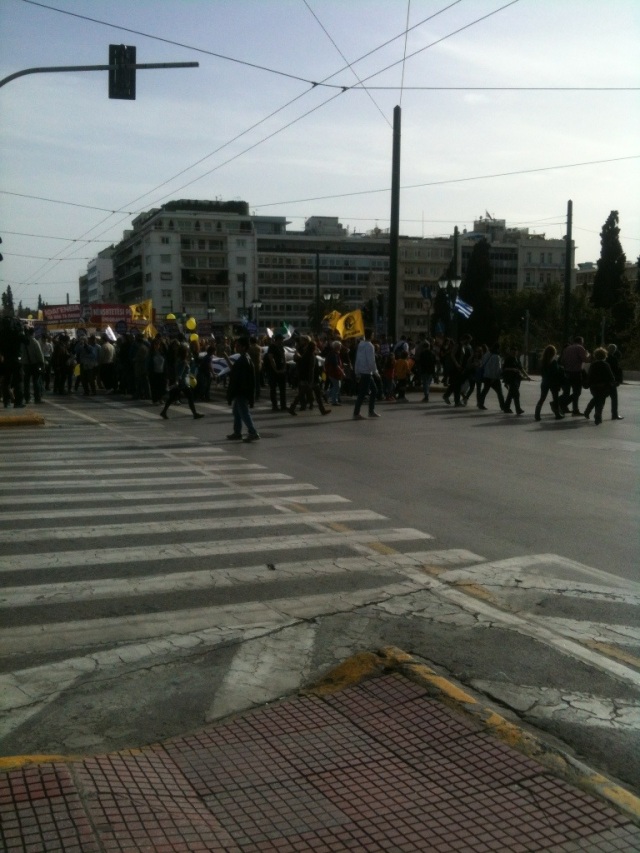 So a double Greek coffee was had at the top of Lycabettus Hill before I ride the funicular down the hill back to Kolonaki. And as I passed through Syntagma Square, there was a protest march starting, with armoured riot police! So I decided to come back to the hotel, rest my feet and stay out of trouble for the night. There has been lots of noise, more of the bustling Saturday night feel, but occasionally a guy with a megaphone rides past in a car shouting stuff. I have no idea what he’s talking about though. But now when I look up at the hill out of the window, I know what’s up there and it’s a good feeling. Tomorrow I get a ferry to Hydra (Ydra – pronounced ee-dra) and I’m looking forward to sitting by the water and eating some good food. And maybe a swim.

I live in the world, and intend to explore it.
View all posts by KTunravels →
This entry was posted in Archaeology, Free Stuff, Greece, Museums, Walking and tagged Athens, Benaki, Lycabettus Hill, panorama, views, Walking. Bookmark the permalink.